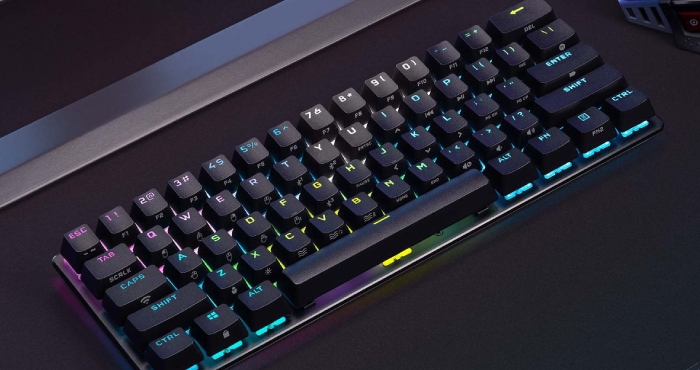 Corsair’s K70 Pro Mini Wireless is the company’s first mechanical keyboard to feature hot-swappable switches, which means you can easily remove and replace them with an included tool – no soldering required. The $179.99 (£169.99 / €189.99) keyboard is also wireless, lasting up to 200 hours on battery with its RGB lighting turned off.

Hot-swappable switches have become increasingly popular on enthusiast mechanical keyboards, giving owners an easy way to get a completely different typing feel without the need to buy an entirely new keyboard. The feature also provides the option of trying out less common hobbyist switches, which can be hard to find preinstalled on off-the-shelf keyboards. Support for hot-swappable switches is still relatively uncommon on keyboards from mainstream gaming brands, with Logitech being one of the few major brands to offer support.

Out of the box, Corsair’s K70 Pro Mini Wireless is available with either Cherry MX Red or Cherry MX Speed Silver switches. Both are linear (meaning there’s no discernible bump as you type), but the Silver switches are aimed at gamers and are designed to actuate quicker. As a word of warning, note that the K70 Pro Mini Wireless only supports three-pin switches (otherwise known as plate-mounted switches), which means you may have to clip the additional plastic pins off five-pin switches (aka PCB-mount switches) if you want to install them in the keyboard.

Otherwise, the feature set of the K70 Pro Mini Wireless is likely to be familiar to anyone that’s used one of Corsair’s keyboards in the past. It has a compact 60 percent layout that doesn’t even include a set of dedicated arrow keys (which, in my opinion, makes the layout a bit of an acquired taste), durable PBT double-shot keycaps, and RGB lighting. If you leave the RGB lighting on, Corsair says the keyboard offers up to 32 hours of battery life, but turn it off and it says you could get as much as 200 hours.

If you use the keyboard wired, it has a polling rate of up to 8,000Hz, meaning it can report key presses to a connected computer around eight times faster than many other keyboards. Corsair claims this results in average latency of under a quarter of a millisecond. If you’re connecting wirelessly, there’s the choice of connecting via an included USB dongle or Bluetooth (where the keyboard can remember up to three paired devices).