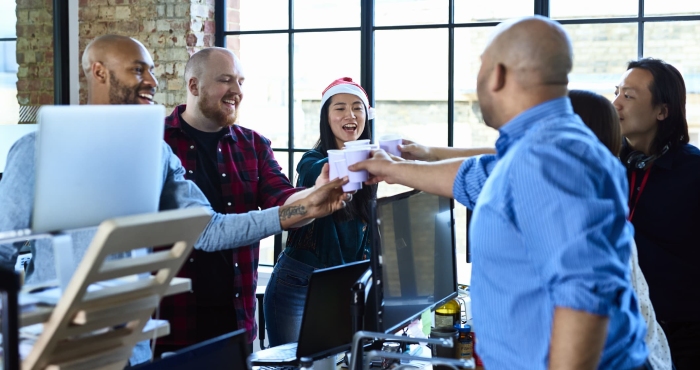 When Briana Bell was looking to switch jobs this year after stints at Salesforce and Snap, her approach to the market had changed from prior years.

With layoffs hammering the tech industry for the first time in well over a decade and hiring freezes making their way across Silicon Valley, Bell took a look at her options. She landed on a lesser-known private company called Everlaw, which provides cloud-based litigation software.

“I was looking at a few other larger, enterprise-size companies in the San Francisco Bay Area,” Bell said in an interview. “Everlaw was probably the smallest company I was interviewing with.”

It wasn’t the first time she’d heard of Everlaw. The company originally reached out to her back in 2019, but at the time she chose to join Salesforce as a senior analyst.

After a decade-plus of unfettered expansion, the tech industry hit a major snag in 2022. Layoffs hit some of the biggest companies, with others implementing hiring freezes. In November, Meta, Amazon, Twitter, Salesforce and HP announced significant cuts to their workforces.

More than 50,000 tech workers were let go from their jobs in November, according to data collected by the website Layoffs.fyi. The total for the year has surpassed 150,000.

“Given the tech layoffs and lower hiring by the big-tech companies, folks are looking for smaller tech companies to join,” said Christopher Fong, founder of Xoogler.co, a network for ex-Google employees.

In the absence of the stability that the largest tech companies once offered, workers are looking to startups and midsize companies that offer greater flexibility and, in some case, the opportunity to have a bigger impact.

Bell said the many headlines about job cuts at top companies in the industry played a role as she was considering her options.

In looking at startups, she had to have confidence in the business. The meltdown in tech stocks this year and tumult in the broader economy led to a dramatic drop in venture funding and a complete freezing of the IPO market.

“I tried not to think a lot about tech layoffs when interviewing,” Bell said. But she admitted, “this is something that’s going to be very important in my job decision process, and I need to make sure the company is in good financial standing and that executives are being pragmatic.”

“From where I sit, we’re really seeing this market shift could usher in a heyday for startups acquiring top talent, particularly for ones like us that are maturing,” Liu said. “It’s been a big-tech talent loss but startups’ gain.”

Recruiters told CNBC that the tech job market remains competitive, even if workers are entertaining fewer offers at a time than they were in recent years.

“They’ve still got product they need to build and ship, so they need people,” Illovsky said.

Coming into 2022, the tech giants appeared as impenetrable as ever. Shares of all of the FAANG (Facebook, Amazon, Apple, Netflix and Google) companies had reached record highs between June and December of last year, and their dominant position in their respective industries appeared mostly secure.

They’ve all been roughed up this year, to varying degrees. Facebook (now Meta) has lost two-thirds of its value and said last month it was laying off 13% of its workforce. Amazon is down by half and recently paused hiring for its corporate workforce. Netflix has eliminated around 450 jobs over two rounds of cuts, and Alphabet CEO Sundar Pichai told employees in July the company would be slowing hiring investments through 2023.

“It’s a good time for startups to access talent when you’re not competing against one of the FAANG companies,” said Megan Slabinski, West Coast district president for staffing firm Robert Half.

“It’s also easier to retain folks right now because they’re not getting 17 calls a day from recruiters,” said Padgett, whose 6-year-old company is headquartered in Seattle, putting it in the same market as Amazon and Microsoft.

Cybersecurity firm Expel CEO Dave Merkel said his 470-person company is planning on hiring for more than 50 roles in the coming months.

“This time of year is usually not very busy for our recruiters, but right now they are super busy, because we are seeing an influx of people from some of these kinds of companies,” Merkel said. “Whether they’re in a role but nervous about what might happen next year or they were caught up in a layoff, they’re more interested.”

Yong said it’s a theme that’s running across much of her network.

“A lot of my friends are startup founders, and they all say it’s a really good time to be hiring,” said Yong, who started Gullie last year. “I’ve spoken to people from big-tech firms more lately, and they’re all very open to opportunities at early-stage startups, and some are even reaching out to us.”

Bell and others in the industry who spoke to CNBC said they’re looking for companies that offer a stronger sense of values or a clearer mission, which often gets lost over time. They also wanted to have a bigger impact than what’s often possible at the industry giants.

“When I was looking at companies, I thought about how much can the work I bring to this company really impact their go-to-market strategies,” Bell said. “If you have a role at a larger company, especially like we’ve seen at Facebook and Twitter, some of their roles don’t seem like they were as impactful across the company.”

Bell said she was also influenced by the emotionally charged events of the last couple of years. Her first week at Salesforce coincided with the murder of George Floyd, who was killed in May 2020 while in police custody.

That “really reignited that fire I had from studying political science and policy,” she said, adding that she paid more attention to a company’s values in her job searches.

In addition to themes of racial justice and equality, Liu said that during the Covid-19 pandemic, “it became important to look for a company whose mission resonated with me personally.”

Amperity’s Padgett said the pandemic changed a lot in how people think about their jobs.

“It seems like if you need something more inspiring than sitting in your house all day as a part of a 100k-person company feeling like a number, then you’re looking for more like-minded individuals in a more personal setting,” Padgett said. “People are wondering, ’how do I have a bigger impact if I’m going to be working my guts out 12 hours a day from my spare bedroom.”