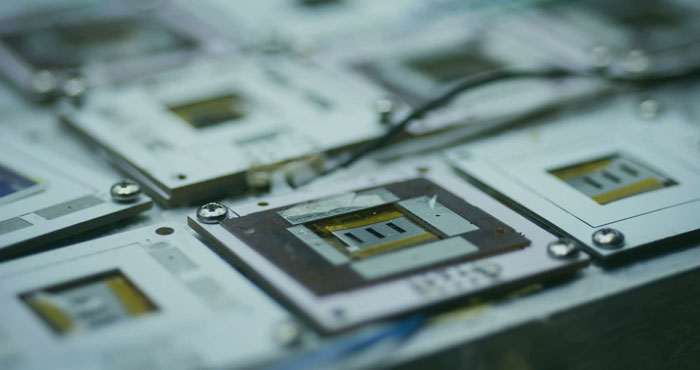 Researchers at Princeton University are hopeful their recent strides in solar cell technology will help push the industry beyond energy-intensive silicon manufacturing.

According to a paper published Thursday in the journal Science, the team recently developed the first perovskite solar cell, or PSC, with a commercially viable lifetime of three decades, along with a new “accelerated aging technique” for testing the devices. Preliminary tests indicate the device can perform above industry standards for around 30 years, which is 10 years longer than the threshold for viability for silicon solar cells.

Perovskites are a type of a semiconductor that can be manufactured at room temperature, but exist naturally as calcium titanium oxide crystals. They are more energy efficient than silicon, which is manufactured at temperatures around 3,000 degrees Fahrenheit. PSCs can also be made to be transparent and pliable, while the ubiquitous silicon cells, initially introduced to the market in 1954, are typically rigid and opaque.

“Perovskites are made from ink-based formulations so the processing can be done with substantially lower energy inputs, and today, this translates to significantly lower carbon footprint,” said Lynn Loo, the Princeton engineering professor who led the team, in an interview.

She added, “They also have chemical tunability – meaning that tuning their composition will allow you to change the characteristics of perovskites to suit applications needs. So we have, for example, made transparent perovskite solar cells by tuning the chemistry and composition of the perovskites; these can be incorporated into windows for building-integrated applications.”

When research into the commercial viability of PSCs began in earnest around 2009 and 2012, the first devices lasted just minutes. Loo explained that perovskites are well known as being chemically fragile and can decompose when exposed to humidity and moisture and in some cases, light and heat. To substantially harvest the power of the sun, the team focused on layering the PSCs with different materials to optimize light absorption and prevent the semiconductors from burning out so soon.

At the same time, the team created a new aging technique to expose the devices to the equivalent of 30 years’ worth of atmospheric conditions. Loo said it’s essentially a light box with a heating element. To produce the result detailed in the paper, the team chose four aging temperatures and measured results across these four different data streams, from the baseline temperature “of a typical summer day” to an extreme of 230 degrees Fahrenheit.

Ultimately, the lifespan of the Princeton engineers’ PSC device is five times that of a previous record set in 2017.

“Silicon solar cells are great – they are efficient and stable and are the workhorse today,” she said. “The primary drawback, as we pointed out in our article, is the high energy input that is required to make silicon.”

While the development reflects a leap forward for PSCs, Loo said the broader implication is “an important technological solution for decarbonization.”

“This work fits in our collective and general efforts to develop emerging technologies for decarbonization,” she said.