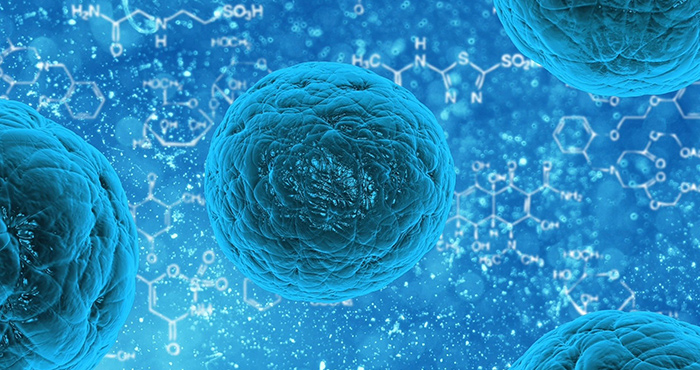 The origin of complex cells started without oxygen, new research suggests.
Since the 1960s, many experts have argued that the emergence of eukaryotes (cells containing a clearly defined nucleus) happened in response to the oxygenation of Earth’s surface environment.
But a team led by the universities of Stanford and Exeter say recent advances in the Earth and life sciences challenge this view.
Their review says these breakthroughs “decouple” the emergence of eukaryotes (known as eukaryogenesis) from rising oxygen levels, and suggest eukaryotes in fact emerged in an anoxic (no-oxygen) environment in the ocean.
“We can now independently date eukaryogenesis and key oxygenation transitions in Earth history,” said Dr Daniel Mills, of Stanford University.
“Based on fossil and biological records, the timing of eukaryogenesis does not correlate with these oxygen transitions in the atmosphere (2.22 billion years ago) or the deep ocean (0.5 billion years ago).
“Instead, mitochondria-bearing eukaryotes are consistently dated to between these two oxygenation events, during an interval of deep-sea anoxia and variable surface-water oxygenation.”
The emergence of mitochondria – the energy-producing “powerhouses” of eukaryote cells – is now thought to be the defining step in eukaryogenesis.
Mitochondria have different DNA to the cells in which they live, and the new paper addresses the possible origin of this symbiotic relationship, famously championed by the biologist Lynn Margulis.
“The 2015 discovery of ‘Asgard’ archaea (single-celled organisms) offers a major clue,” Dr Mills said.
“Mitochondria-bearing eukaryotes likely resulted from a merger between archaea and bacteria, and the DNA in modern Asgard archaea is more closely related to the DNA found in eukaryote nuclei today than it is to other archaea.
“This is additional evidence that the host that took in the bacterium was an archaeon.”
Asgard archaea live in anoxic ocean sediments, and they can live symbiotically with bacteria – possibly the same situation that led to the “metabolic coupling” that created the first eukaryote cells.
Professor Tim Lenton, Director of Exeter’s Global Systems Institute, said the new evidence supports the “hydrogen hypothesis” (that mitochondria were acquired in anoxic conditions) first put forward in 1998 by Bill Martin and Miklos Müller.
“The idea that oxygen led to eukaryogenesis has been taken for granted,” he said.
“In fact, mitochondrial aerobic respiration probably emerged later, having only become globally widespread within the last billion years as atmospheric oxygen approached modern levels.”
Dr Mills said the review was intended to “bridge a gap” between biology and geology, as “connections were waiting to be made” following breakthroughs in both disciplines.The paper, published in the journal Nature Ecology & Evolution, is entitled: “Eukaryogenesis and oxygen in Earth history.”