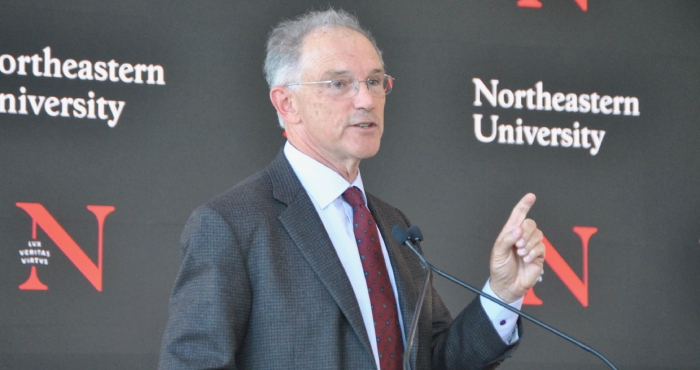 The Roux Institute has shut down its Techstars Accelerator program just two years after it was founded. Northeastern University launched the Roux Institute in Portland in 2020 and announced the partnership with Colorado-based Techstars the following year. The program provided young technology companies with funding, mentorship, training, access to investors, and other resources for growth, with the goal of attracting startup businesses and entrepreneurs to Maine. The initial class of 10 graduated in 2021 and a second class completed the three-month program in December.

Techstars, a private company that operates similar accelerators around the world, invests up to $120,000 in each startup and receives the right to 6% of its equity, according to the Techstars website.

“We are proud of the work the Roux Institute at Northeastern and Techstars have accomplished together over the past two years,” Renata Nyul, vice president of communications at Northeastern University, wrote in an email. “It has been a truly exciting partnership. Because of the rapid growth and success of the Roux Institute, we have built the capacity to scale this critical work in-house. We are looking forward to growing the entrepreneurial ecosystem across the state of Maine.”

She pointed to the institute’s Founder Residency programs. One target underrepresented founders and lasts a full year on the Portland campus. The institute recently announced a partnership with MaineHealth and Northern Light Health for a second Founder Institute specifically for health technology companies. Nyul also said the Roux Institute will be running eight Start Summits across the state “offering engaging, low-barrier entrepreneurship immersion opportunities.”

Nyul did not immediately respond to additional questions, including whether any employees would be laid off as a result of the closure. Leadership at the Roux Institute also did not respond to emails about the decision.

Lars Perkins, managing director of the Roux Institute Techstars Accelerator, wrote on LinkedIn that he was “disappointed” the program would not host a third class.

“For two years it has been the most rewarding job I could imagine – working with new founders to help accelerate their companies’ growth and forge (or strengthen) their connection to Maine,” he wrote. “Many of them consider it a ‘life-changing’ experience, with some characterizing it as the ‘best experience of their life.’ I admire those founders who left more secure careers and prospects to start the journey that many dreams of, but few take.”

He also described a welcoming and supportive network in Portland.

“Our founders walked into local businesses, from medical offices to tailor shops, and were always welcomed,” he said. “One of them reached the counter and found his dinner had been paid for by a local resident he had a casual chat with in the checkout line. That’s Maine for you in a nutshell.”

Perkins added that he was proud of the companies that completed the program and found Northeastern to be “a great partner.” He said those graduates would continue to be “part of the Roux and Techstar families” but did not say what his next role would be.

“Building the Portland tech ecosystem will be a marathon, not a sprint,” wrote Perkins. “I believe strongly in the Roux’s integration of entrepreneurship into their academic programs, and personally look forward to staying involved in whatever role I can to support their many other entrepreneurial initiatives.”

A VARIETY OF STARTUPS

Of the 20 companies that completed the program, three were from Maine. They were Omnic Data, which uses artificial intelligence and machine learning to provide statistical analysis to esports organizations; Hey Freya, a wellness program for women; and Torque, a software development company. Others came from places such as New York, California, and Chile. Maine Startups Insider reported that several companies – including Circa, a flexible payment platform for rent, and Eskaud, a data platform built for field operators – relocated to Maine as a result of the program.

Helkin Berg is one of the founders and the CEO/CTO of Hey Freya. The company participated in the Roux Institute Founders Residency and the Techstars Accelerator and is set to launch its products later this month. Hey, Freya aims to reduce burnout and improve wellness for women through at-home health tests, personalized supplements, and personalized health insights.

Berg said both programs were critical to starting the company through access to resources and mentors.

“I’ve been in startups for most of my career, and starting a company from the ground up is a huge risk and takes a ton of time,” said Berg. “The Roux residency program provided me the opportunity to quit my job and focus solely on company creation. Techstars was similar in that sense … We were able to act with the resources of a much bigger team than we were.”

Berg said she was grateful Techstars partnered with the Roux Institute and gave companies access to a global network of mentors. But even as the program ends, she said, the institute offers unique and attractive opportunities for startups, such as the partnership with the state’s two major hospital networks.

“I’m really excited to see what happens here,” she said. “I feel like it would be hard to find a more supportive community, frankly.”

Northeastern University launched the Roux Institute in 2020 with a $100 million gift from David Roux, a Maine native, investor, and philanthropist. The graduate school and research center plan to build a high-tech graduate school, business accelerator and training pipeline at the former site of the B&M baked bean factory in East Deering. The Portland City Council is scheduled to vote in February on proposed zoning changes that would make way for the new campus, which ultimately may host about 5,000 students.