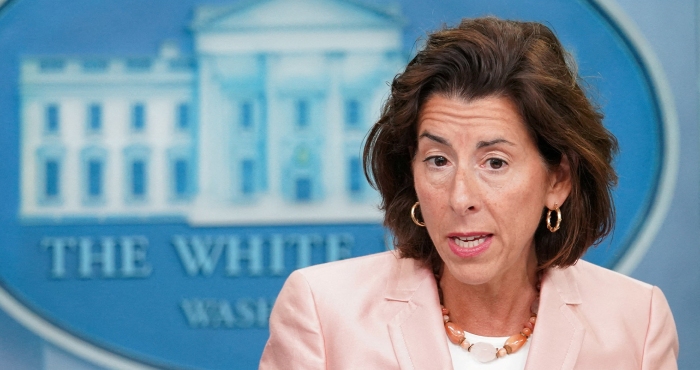 U.S. Secretary of Commerce Gina M. Raimondo joined former Under Secretary of State Keith Krach, chairman of the Krach Institute for Tech Diplomacy at Purdue, to discuss ways to leverage the recently signed CHIPS and Science Act to advance U.S. global leadership in technology. The conversation was hosted by the Global Tech Security Commission – a partnership between the Krach Institute and the Atlantic Council. The Commission has the support of lawmakers and private-sector leaders at a time when the United States is working to unite its transatlantic and Indo-Pacific allies and partners across a range of critical technology issues.

“As Under Secretary of State, Krach’s Global Economic Security Strategy focused on turbocharging economic competitiveness and innovation through investing in R&D, retraining the workforce, increasing access to capital, fostering STEM education, accelerating the digital transformation, and rebuilding the manufacturing base, all of which were incorporated in his team’s early design of the $280 billion bipartisan CHIPS and Science Act,” said David Shulman, Director of the Atlantic Council’s Global China Hub.

“The implementation of the CHIPS and Science act plays a critical role in Global Tech Security. I thank Secretary Raimondo for making the implementation of this critical law a national priority, and for joining me to underscore the importance of trusted technology to U.S. economic and national security. My fellow Silicon Valley CEOs compare its potential impact on American innovation to the Apollo program,” said Keith Krach, former CEO of DocuSign and Ariba. “General Secretary Xi is obsessed with owning the semiconductor business and is terrified of the U.S. having a modern Sputnik moment. This is a big bipartisan win that epitomizes Xi’s biggest fear: a united United States. Now it boils down to execution,” Krach observed.

“The job begins now. This is an unbelievable opportunity to implement this big, bold vision. The Apollo program is a good example,” said Commerce Secretary Gina Raimondo. “This is a call to the American people to step up. Universities are going to have to produce orders of magnitude more engineers, more technicians, and more computer scientists. We want research institutions to match up their research with our national defense needs,” she said.

Krach said that Silicon Valley looks at this as an inflection point. “It’s not just the CHIPS and Science Act, it’s the 6G Act, the Quantum Act, the Biotech Act, etc… There is $200 billion going to research institutions, which is just incredible.” Raimondo added: “Keith, you have been on this for a long time. God bless you for being one of the people early in the wilderness, waving the flag, and pushing us here. Now we must meet the moment and that’s why this is an all-hands-on deck for everyone, everyone in America.”

Krach noted that creating an effective implementation program requires establishing early on at least one showcase company and one showcase university and that these ideal implementation partners’ success stories will provide a model for the others to follow. Raimondo added: “When I think about an ideal partner, I think of someone who wants to be collaborative. Who wants to work with government and industry and who’s really going to focus on this? We got to meet the mission here.”

Krach brought up Strider Corporation’s recent report which documented that the People’s Republic of China recruited 162 Los Alamos national laboratory scientists to support its military and technology programs. He mentioned that the Krach Institute for Tech Diplomacy at Purdue has been receiving requests on how best to guard against intellectual property theft, and will be publishing a set of best practices for policies, processes, and procedures for protecting IP, product, and process technology. Raimondo responded, “We’ll work with you on that. It would be great because a lot of companies – particularly the smaller midsize – don’t know what to do. They could really use a workplan or a template. So, setting the best practices would be really a great thing, a benefit.”

Krach also pointed out that one of his team’s original intentions in creating what would become the CHIPS and Science Act was for the money in the bill to serve as a carrot and stick to end rampant university IP theft and companies transferring technological know-how by building plants in China. Raimondo agreed, saying, “The minute you take this money, we don’t want you building the most sophisticated chips in China. If you make the legacy chip in China, let it stay in China. We’re going to look if the company has a good record of complying with IP protections and is doing everything it possibly can do to protect America’s IP. Same thing with export controls. We’re pretty eyes wide open about China’s threat.”

“Corporate boards increasingly understand doing business with, in, or for China represents tremendous risk. They know their fiduciary duty to their shareholders is to mitigate risks,” said Krach. “That’s why many of the most respected board members are demanding a China contingency plan from their CEOs. The Institute for Tech Diplomacy at Purdue has gotten numerous requests from CEOs for a China risks mitigation checklist.” Raimondo responded: “It’s interesting you say that, because I hear it too, from other CEOs. Especially companies that have been manufacturing in China for ten, twenty, or thirty years. What I say to them is going to places that are working with the United States and align [with] their tech standards, rule of law, transparency, and anti-corruption. That should go on the checklist.”

The two-year mission of the Global Tech Security Commission established by the Krach Institute and the Atlantic Council is to develop a Global Tech Security Strategy that complements such multinational efforts as the Indo-Pacific Economic Framework and the Future of the Internet declaration. While previous commissions have primarily focused on analyzing problems and offering recommendations limited to defensive policies, the Global Tech Security Commission will not only consist of offensive and defensive strategies for combating techno-authoritarianism but will also begin to build a Global Tech Trust Network for adopting Tech Trust Standards to accelerate the use of trusted technology.

Krach described the Trusted Tech Finance Initiative which provides trusted technology solutions in low-income countries to close the digital divide, particularly in the rural areas, and mentioned this pre-packaged solution was something he dreamed about while chairing the Development Finance Corporation. “That’s fantastic,” said Raimondo. “I was recent with my counterpart in India, just to take one example. The whole focus is to lift people out of poverty. We will look into this. I appreciate you bringing that up because we must make it easy. Packaged solutions matter. Money matters. Financing matters. It’s not enough to want to do the right thing. We have to enable it.”

Krach pointed out that the CHIPS and Science Act is paramount to the Global Tech Security Strategy, and asked Raimondo if things go according to plan, what it would look like ten years from now? She answered: “The country is producing a million more engineers a year. We have created 150,000 new manufacturing jobs, and hundreds of more startups related to chips. Our dependence on Taiwan for chips is cut substantially. It’s a new dawn of innovation. If we drew the curve for R&D investments as a percent of GDP, it’s down now. This is the beginning of a comeback. And the same for U.S. manufacturing.”

When Krach asked Raimondo what else she would like to see in the Commission’s Global Tech Security Strategy, Raimondo said: “Somebody should come up with a Clean Network concept (referring to the Clean Network Alliance of 60 democracies and 200 telcos assembled by Krach and his team to defeat China’s masterplan to control 5G communications). But in all seriousness, that was brilliant. Brilliant because it was simple. It also brought allies together. That is the key to success.”

Krach told Raimondo that she is now an honorary Boilermaker after her visit to Purdue with Secretary Blinken. Raimondo responded, “I love that. What we saw at Purdue that day was unbelievable, like really cutting edge, exactly where we need to be. I love that Purdue created a whole semiconductor master’s degree program. When we were on campus, Purdue had a job fair that had dozens of chip companies on campus recruiting. That is just what it’s all about.”