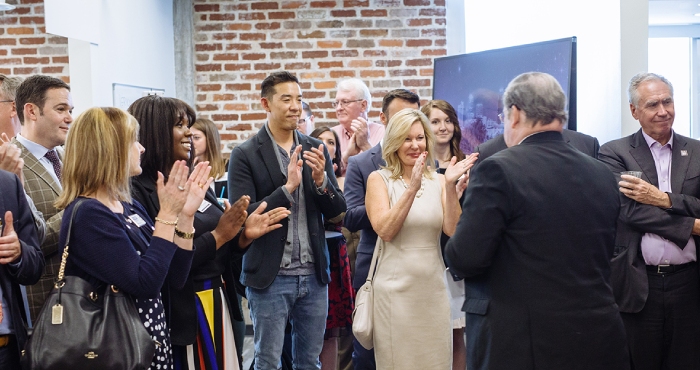 The Little Rock Venture Center’s development, probably as it should be, tracks the entrepreneurial blueprint that diagrams the life of a startup business: there’s an idea, followed by research to assess its viability, development of a business plan, fundraising efforts, early struggles and, for the fortunate few, success and expanded growth.

The Venture Center has found that success and established an internationally recognized brand as an organization that elevates financial-technology companies in the early stages of development. Its work has drawn financial, programming, and executive support from a global technology company and a national community banking group – and the accelerator programs they sponsor have drawn about 280 applicants from 40 countries.

This week the entrepreneurial support organization begins an effort to capitalize on its efforts with an inaugural fintech summit that will attract up to 400 bankers and startups.

It hasn’t always been like that. The initiative got little respect in the early days. An article depicting its struggles to land downtown on Main Street — its main offices today — noted the technology park where it was then housed was home to “startup companies with scant operations or revenue (that) are renting space.” There weren’t many reasons to pay attention in the early days. The Venture Center, in its first year, had no money, no staff, and no offices. “The Venture Center itself is a great example of the entrepreneur journey,” Little Rock Regional Chamber of Commerce President and Chief Executive Officer Jay Chesshir recalls. “We were bootstrapping it just like an entrepreneur would bootstrap a company.” The Ve n t u re Ce n te r traces its roots back to 2005 when the chamber began to drum up support to create a research and technology park, which today is the Little Rock Technology Park, a 38,000-square-foot space on Main Street that houses the Venture Center’s operations.

Legislation to create the tech park was passed in 2007, and in 2011, Little Rock voters helped fund it with $22 million from sales-tax proceeds.

The Venture Center’s unassuming beginnings turned around when FIS Inc., Fidelity National Information Services, jumped in with financial support in 2016 after an initial effort to entice another local company failed. Gary Norcross, chief executive officer of FIS, which started in 1968 as Systematics Inc. in Little Rock, is a University of Arkansas grad who began work with the company as a management trainee.

“We have such a proud heritage of being a part of Little Rock and part of Arkansas, and that is something we don’t take lightly,” Nor-cross said in 2015 when he was the keynote speaker at the chamber’s annual meeting.

The company’s support led to the development of the FIS Fintech Accelerator, a 12-week boot camp where bankers and financial-services executives engage in hands-on sessions that help refine the products and services fintech startups are developing.

Similarly, the Independent Community Bankers of America forged a partnership with the Venture Center in 2020 to create the ICBA ThinkTech Accelerator, which brings in startups to pitch and hone products specifically for the community-banking sector.