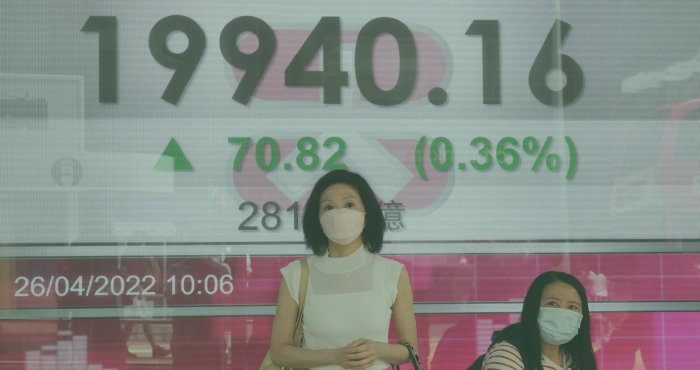 Asian shares were mostly higher Tuesday after U.S. stocks stormed back from sharp losses to log strong gains.
Tokyo, Hong Kong and Seoul advanced while Sydney declined.
Shanghai fell back on renewed concerns over pandemic lockdowns that might further crimp the world’s second-largest economy and hinder global economic growth.
The Shanghai Composite index fell 0.9% to 2902.46, giving up early gains. On Monday it slumped 5.1%.
China’s capital, Beijing, has begun mass testing of more than 3 million people and restricted residents in one part of the city to their compounds, sparking worries of a wider lockdown similar to Shanghai. That city has been locked down for more than two weeks and that has already prompted the International Monetary Fund to trim its growth forecast for China’s economy.
Hong Kong’s Hang Seng, which lost 3.7% on Monday, was trading 0.7% higher at 20,000.69.
The Kospi in Seoul gained 0.5% to 2,669.41 after the government reported the South Korean economy grew at a 3.1% annual pace in the first quarter of the year, up 0.7% from the previous quarter.
The economy is rebounding from the travails of the pandemic as the government lifts COVID restrictions since case numbers have abated after a wave of the omicron variant.
“This should drive a bounce back in downtrodden parts of the service sector. And a further drop in precautionary savings should provide an extra boost to consumption,” Alex Holmes of Capital Economics said in a commentary. “With private consumption still well below pre-pandemic levels, there is plenty of scope for a rebound,” he said.
In Tokyo, the Nikkei 225 rose 0.4% to 26,700.11 and India’s Sensex gained 1.2% to 57,254.49.
Australia’s S&P/ASX 200 dropped 1.9% to 7,331.30.
US. benchmark oil gained 92 cents to $99.46 per barrel in electronic trading on the New York Mercantile Exchange. It lost $3.53 to $98.54 on Monday.
Brent crude, the standard for pricing international oil, gained $1.23 cents to $103.39 per barrel.
The dollar slipped to 127.89 Japanese yen from 128.14 yen late Monday. The euro rose to $1.0727 from $1.0713.
On Monday, the S&P 500 climbed 0.6% to 4,296.12 after erasing an early 1.7% loss. The rally was led by stocks of internet-related companies, including Twitter, which jumped 5.7% after agreeing to let Tesla CEO and tweeter extraordinaire Elon Musk buy it.
The Dow Jones industrial average rose 0.7% to 34,049.46, while the Nasdaq composite rallied 1.3% to 13,004.85.
The S&P 500 is coming off a three-week losing streak, dogged by worries about the Federal Reserve’s plans to move faster in raising interest rates to curb high inflation.
Gains for several big tech-related stocks were the strongest forces lifting the S&P 500 Monday, including a 2.4% gain for Microsoft and a 2.9% rise for the Class A shares of Google’s parent, Alphabet.
Both are set to report their latest quarterly results on Tuesday.
Wall Street is in the midst of one of the most important stretches of the earnings season. Apple, Microsoft, Amazon and the parent company of Google are all on deck to report this week. Since they’re among the biggest companies by market value, their movements hold the most sway over the S&P 500.
Worries are also high that the U.S. economy might slow sharply or even fall into a recession because of the big interest-rate increases the Fed is expected to push through.
Besides their bottom-line profit numbers, investors are also looking for a better sense of how big companies in the technology, industrial and retail sectors are handling rising inflation and supply chain issues.
Inflation remains a key concern for investors. Investors are worried about whether the Fed will be able to hike rates enough to quell inflation but not so much as to cause a recession. The chair of the Federal Reserve has indicated the central bank may hike short-term interest rates by double the usual amount at upcoming meetings, starting next week. The Fed has already raised its key overnight rate once, the first such increase since 2018.
Wall Street will also get some key economic data this week. The Conference Board will release its measure of consumer confidence for April on Tuesday. The Commerce Department will release its first-quarter gross domestic product report on Thursday.