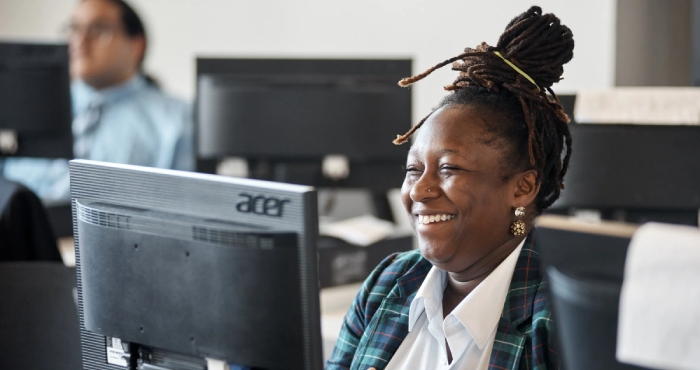 The pandemic was an economic boon for the nation’s tech centers last year, but the tide already has turned as consumers’ demand for remote work software, delivered food and streaming entertainment subsides.

Tech-driven counties in California’s Silicon Valley and around Seattle, Washington, and Austin, Texas, boomed as the COVID-19 pandemic raged, according to a Stateline analysis of new data on economic output released this month by the federal Bureau of Economic Analysis.

The analysis of 2019-2021 changes in county-by-county gross domestic product (GDP) shows how local economies fared in the early months of the pandemic, an indicator of how Americans responded at a time when many were staying home and supply chain problems interrupted some consumer buying.

“When the pandemic came along, we all thought it was going to be a crippling blow to our economy, but we were wrong. It was a bonanza,” said Russell Hancock, CEO of Joint Venture Silicon Valley, a private-public economic development group based in Santa Clara County.

Remote work fed demand for Apple devices and online-based services such as Zoom, DoorDash and Netflix, all based in Silicon Valley, he said. The latest year has not gone as well for tech firms in the pandemic boom towns.

“It was a spike, and it came back down. We’re adjusting,” Hancock said.

Santa Clara County saw the biggest bump in real GDP for a large county between 2019 and 2021, up 19%. Austin’s Travis County grew 14%, and Seattle’s King County grew 13%. Real GDP measures economic output as the total value of goods and services produced in the county, adjusted for inflation.

Other counties with populations of at least a million people and with fast-growing economies from 2019 to 2021 were mostly in the Sun Belt, where jobs and population boomed: Collin County, Texas (up 12%); Palm Beach County, Florida, and Mecklenburg County, North Carolina (both up 9%); and the trio of Salt Lake County, Utah, Hillsborough County, Florida, and Maricopa County, Arizona (all up 8%).

In Washington state, King County software design at companies such as Microsoft and online sales from Amazon helped the county boom despise job losses in tourism and manufacturing, said David Reich, chief economist for the county’s Office of Economic and Financial Analysis.

“The (tech) sector was really important in providing the tools we needed during the pandemic, even if most of those workers were working remotely,” Reich said, adding that tech provided 85% of the county’s boost in GDP.

In Texas, the Austin area hosts tech companies such as Dell and Oracle.

Many of the hot tech economies have cooled this year. King County’s latest economic indicators, compiled by Reich, show last year’s spike dropping back to 2019 levels this year. Tech employment has fallen as big tech firms such as Microsoft and Amazon and online real-estate firms like Redfin and Zillow have announced layoffs, Reich said.

But overall, jobs are up in the Seattle area as tourism returns, drawing more cruise ships and hotel stays. That bodes well for continued, if slower, improvement this year and in 2023, according to King County’s latest projections.

“Runaway growth in tech-dependent counties has likely cooled considerably in 2022,” Kamins said. Tech companies in Silicon Valley and Seattle are considering more layoffs, and more offices in Austin are becoming vacant due to layoffs and hiring freezes.

The biggest GDP loss from 2019 to 2021, 6%, also was in California, in Contra Costa County, east of Oakland, where more conventional manufacturing did not fare well in the pandemic.

“Throughout the pandemic, working people lost so much while a select few saw record profits,” said Joshua Anijar, director of the Contra Costa Central Labor Council, a union group. Tech workers have started moving in as housing prices spiral in the San Francisco Bay Area, but the area’s manufacturing legacy is disappearing. Today, the Posco plant is preparing to shut down, he said.

“We don’t know if we’re going to continue to be an industrial county or just another suburb of Oakland and San Francisco,” Anijar said. “We’re only now starting to see the full effects of the pandemic. At first, we saw the tourism areas suffering, but that’s not us.”

Honolulu lost 5% of GDP from 2019 to 2021 as tourism and convention business had not bounced back. This year, visitor arrivals and spending are up in Hawaii, according to a November state report, and are close to recovering to 2019 levels.

Other counties losing GDP were Queens, New York, (down 4%) and the Bronx (down 2%) where services and hospitality such as restaurants had not recovered. Harris County, Texas, where Houston is located, lost 1% between 2019 and 2021 with energy the main culprit, before oil prices spiked this year.