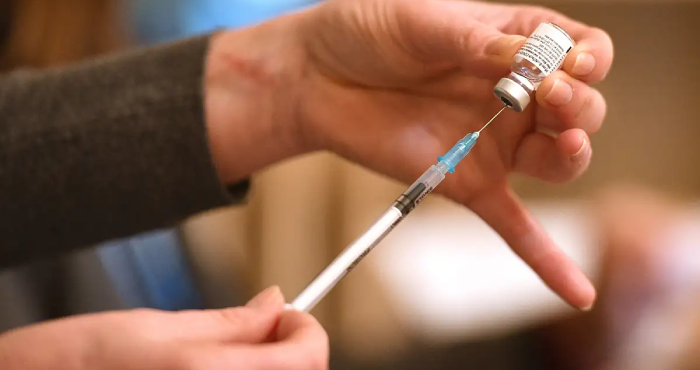 Matt Hancock held talks to hand private medical records and Covid test results of millions of Brits to a US company founded by a Donald Trump donor.

At the height of the pandemic, Mr. Hancock met with representatives of controversial tech firm Palantir, as Health officials panicked over setbacks to the struggling Test and Trace system.

Hancock had told aides he was “very keen” to see a demo of their software.

And emails seen by the Mirror reveal the firm offered to start hoovering up sensitive patient data within “days”.

Under the plan, Public Health England and Test and Trace staff would have been told to enter patient records – including names, contact information, and medical data into Palantir’s Foundry system.

It could then be “cleaned” and sent back to DHSC, where anonymized versions could be used for a public ‘dashboard’ – or made available to private data mining firms.

But the plan stalled after NHS and Public Health England (PHE) officials pushed back with concerns over using the Covid emergency to rush the privacy-busting plan through.

But Palantir, founded by billionaire Peter Thiel, is now bidding for a £480 million deal to build a similar “Federated Data Platform” for the NHS – pulling in information from Hospital trusts across the country.

And since 2020 the firm has secured more than £37 million in contracts with the NHS and the Department of Health and Social Care (DHSC).

Cori Crider, a director at data privacy campaign group Foxglove said: “Reading this email just exposes how hard ministers have been pushing Palantir all along.

“And the stakes are even higher now than in 2020 – there’s almost half a billion quid of public money on the table, with a new £480 million tender for the Federated Data Platform.”

She added: “It sure looks like Hancock helped put Thiel’s firm in pole position. How is anyone meant to believe the bid process will be fair now we know top ministers were working three years ago to embed Palantir inside the heart of NHS data?”

But Mr. Hancock had “no mandate” to order them to do so, – something described as a “blocker” in records of the meeting.

Emails also admitted there had been no “approvals” for the firm to handle identifiable patient data.

In one email, Palantir representative Louis Mosley says they would be able to resolve Test and Trace’s communication problems “as soon as [Hancock] is able to …remove the blockers…”

And, he boasts: “Aggregate and anonymized versions of this data can be made public, enabling the UK to regain its status as a world leader in the publication of health care data”.

DHSC tech officials later described the meeting with Hancock as “constructive”, and started putting Palantir in touch with counterparts in NHS, PHE, and Test and Trace to discuss “data strategy”.

It’s the first time a record of the October 2020 meeting has been made public, following an 18-month battle with DHSC.

Health officials have previously claimed neither official minutes nor a list of people who attended the meeting existed.

And DHSC only released the heavily redacted cache of emails to the Sunday Mirror after the Information Commissioner stepped in to order them to do so.

After the deal stalled, Palantir reportedly sought to get hold of Brits’ health data by quietly “hoovering up” small businesses serving the NHS.

An internal email sent by Mr. Mosley, revealed by Bloomberg last year, revealed the fall-back plan, which he hoped would “take a lot of ground and take down a lot of political resistance.”

But Palantir is said to have failed to make headway in locking in deals with smaller health firms.

Ms. Crider added: “Foxglove has been fighting to keep Peter Thiel’s spy tech firm Palantir out of our NHS since the pandemic began. Anyone who loves the NHS needs to wake up to this company – and fast.

“Only this week Palantir’s chair, Peter Thiel, explicitly said that British people’s regard for our NHS is “Stockholm syndrome” – and that the UK should “rip the whole thing from the ground and start over.”

“So what on Earth was Matt Hancock doing seeking to install this company at the heart of NHS infrastructure?”

A government spokesperson denied the department had resisted releasing the emails, claiming the 17-month delay had been due to a high workload.

They added: “Ensuring the privacy of patient data is a priority for the NHS and government, and we follow cyber-security best practices to help protect it and comply with the law around its use.”

A Palantir spokesperson said: “We’re proud that, during COVID, Palantir software was used to distribute PPE and Ventilators, and for the vaccine rollout. We were also invited to discuss with the Health Secretary whether it could be used for Test and Trace. This would have been very similar to its use for the vaccine rollout and, more recently, to reduce NHS waiting lists and speed up cancer diagnosis – all while rigorously protecting data privacy.”

A spokesperson for Matt Hancock said: “A big part of Matt’s job was to meet companies and organizations on behalf of the DHSC who could help modernize the NHS and save lives – including Palantir, who have done amazing work for the health service.

“Through the better use of data, Palantir has undoubtedly saved many, many lives and will continue to do so.”