How many times have you come across a brilliant article that you wanted to read but not at the moment as you running behind a deadline? So what do you? You may save this article for a later read. To do so there are many options today. You can save the blog you want to read as a bookmark, add it to your notes or sticky notes app, share the link of the blog to your mail, and so on. What if we tell you there is a better and more organized way to do it? The latest version of the Google Chrome browser released a new ‘ Read Later’ feature. Yes, this is the feature that most people, including me, were looking forward to! No more bookmark hassle or the need to search for the article link that you wanted to read so badly! Google Chrome has simplified and made it easy for you to access the article that you had saved for a later read, at one go. However, to enable Chrome’s new ‘Read Later’ feature, you need to activate a Chrome flag – chrome://flags/#read-later, followed by a few steps. 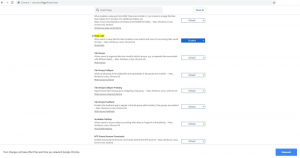 3. Once enabled, a new option – ‘read later’ will be added to the Chrome tab right-click menu. In other words, when you mouse-over the tab of the blog or article you want to read later and right click your mouse – a series of options will appear. One of the options would be – ‘Read tab later.’ It would look something like this: 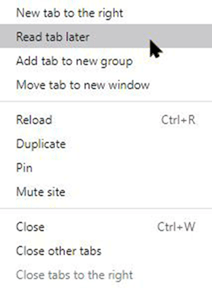 4. Once you select this ‘Read tab later’ option – the article tab link that you wanted to read later gets added to the bookmarks folder called “Reading list.” Now you can add any number of articles, blogs, etc. to this list that you want to read later. This way it will be easy for you to manage your reading list as it will show the number of articles you have read so far and the ones you are yet to read. It might look something like this:

That’s it! You are good to go!

Also Read: All That You Need to Know About Google’s New Shopping Features

Microsoft Edge Gets ‘Startup Boost’ Feature: How to Enable it

How to Set Custom App Icons on Your iOS 14 Home Screen?

How AI-Powered Thermal Cameras Are Assisting the COVID-19 Screening?