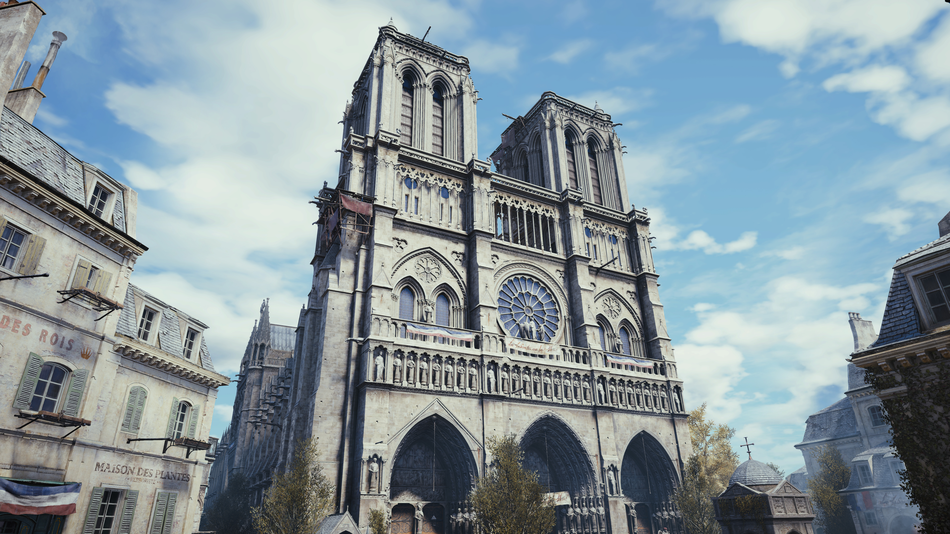 When the Notre Dame Cathedral burnt, all of Paris, its residents and tourists mourned for the damages done to the iconic monument. The Gothic Cathedral was a major landmark in world architecture and history. Known for the Gargoyles, spires and kaleidoscopic interiors, the Notre Dame is both marvellous and intricate in details.

When the roof burnt, everyone had questions about its restoration. Not knowing how much damage was done wasn’t helping but, right before we lost hope, help came from the most unexpected place. French video game company Ubisoft stepped in to help armed with their popular video game, Assassin’s Creed. Now that might sound a little strange to architecture geeks, but trust me when I say this, video games have materials that can help rebuild structures and even whole cities. Don’t believe me?

The above image demonstrates how the Notre Dame looks in the Assassin’s Creed Unity. The game features the cathedral the way it was in the 1700s. It displays the building at its prime before the fire destroyed the wooden structure making it a helpful reference tool for restoration. However, it isn’t an official blueprint of the cathedral, so it might not meet the precision required for construction.

Ubisoft’s spokesperson mentioned in a statement:

“It is important to keep in mind that what we did for the game was not a scientific reconstruction but rather an artistic vision.”

The game developers have offered a little more than their expertise, donating 500,000 euros towards the restoration. Guess they really take architectural elements in games seriously. And while we mull over the stunning details on Assasin’s Creed, there’s a whole bunch of games that love architectural detailing. State of the Art serious games has immense potential to contribute to the cultural heritage field. We’ve had games putting details in the spotlight for the longest time now and we’re revisiting some of them for architectural appreciation.

After the nuclear power plant explosion, Chernobyl, the alienated zone was quarantined. Naturally, it caught curious eyes of the public and of one particular production team of GSC Game World. The Ukrainian video game developer based in Kiev intended to study the environment of the site in order to replicate it for S.T.A.L.K.E.R: Shadow Of Chernobyl. The makers took photo referencing tours to get a real idea of the Chernobyl site. They even sourced textures from the real locations. And the result is a stunning reimagination of the much talked of the site in a detailed virtual world.

Spiderman is New York’s superhero. Getting the details of the city in the Spiderman game is a crucial aspect of the in-game experience. And we think the game nailed it, well, most of it atleast. There are a few subtle changes but that’s only in favour of fictionalising the city. There are freedom towers (although the only clue we get is a tour guide talking about the World Trade Centre blasts when you walk by) and most importantly, the Empire State building. In the game, the building looks huge dominating the skyline just the way it does in real life. They even added Fisk towers (Fisk is one of the Spiderman villains) as a subtle reference to Trump International Hotel in the same spot.

While the games on the list strive towards structural accuracy, Fallout takes those architectural details and turns it on the head. The game takes players through a torn apart, dystopian version of Washington DC in stunning clarity. To create these, researchers would have to study the buildings of the city and create the weathered, dystopian version it. In a side by side comparison, you’d get a better idea of how the real deal has been mimicked and transformed in the virtual version.

As a cosplayer, I already know video game patterns are detailed enough to create costumes from scratch. But this piece of information puts games on the map (quite literally) and I think that’s awesome. The levels of imitation could puzzle Aristotle but heck, this is the best story of the virtual world blurring with the real.

Cultural elements in the games include monuments, artefacts, historic sites and machines. Adding to these is the natural heritage that makes up the weather, atmosphere and the biodiversity of the region represented in the game. Production teams would have to study both kinds of heritage to draw them into the virtual world and if they are set in a historic time, they’d have to include historical reconstruction as well. Now, that’s a handful but it improves the gaming experience and of course, in Notre Dame’s case, aides physical reconstruction outside the virtual realm.